The Young Retailer of the Year program, now in its 25th year, identifies and promotes the next generation of aspiring independent home improvement, paint and decorating retailers. It recognizes individual achievement by industry retailers age 35 and younger throughout the U.S. and Canada. Selected from three separate retail categories, honorees are chosen based on a number of criteria, including professional milestones, community engagement, continuing hardware industry education and extracurricular activities.

In 2010, Donnelly began working with his father at Flanagan Paint & Supply, in the Soulard neighborhood of St. Louis, Missouri, after graduating from Southeast Missouri State University with a degree in construction management.

Donnelly’s father, Jim, had purchased Flanagan Paint in 2007 and asked him to join the company after his business partner died. Jim’s background was in sales, and his focus was on outside sales, whereas his former business partner had managed the in-store retail and contractor side of the business. 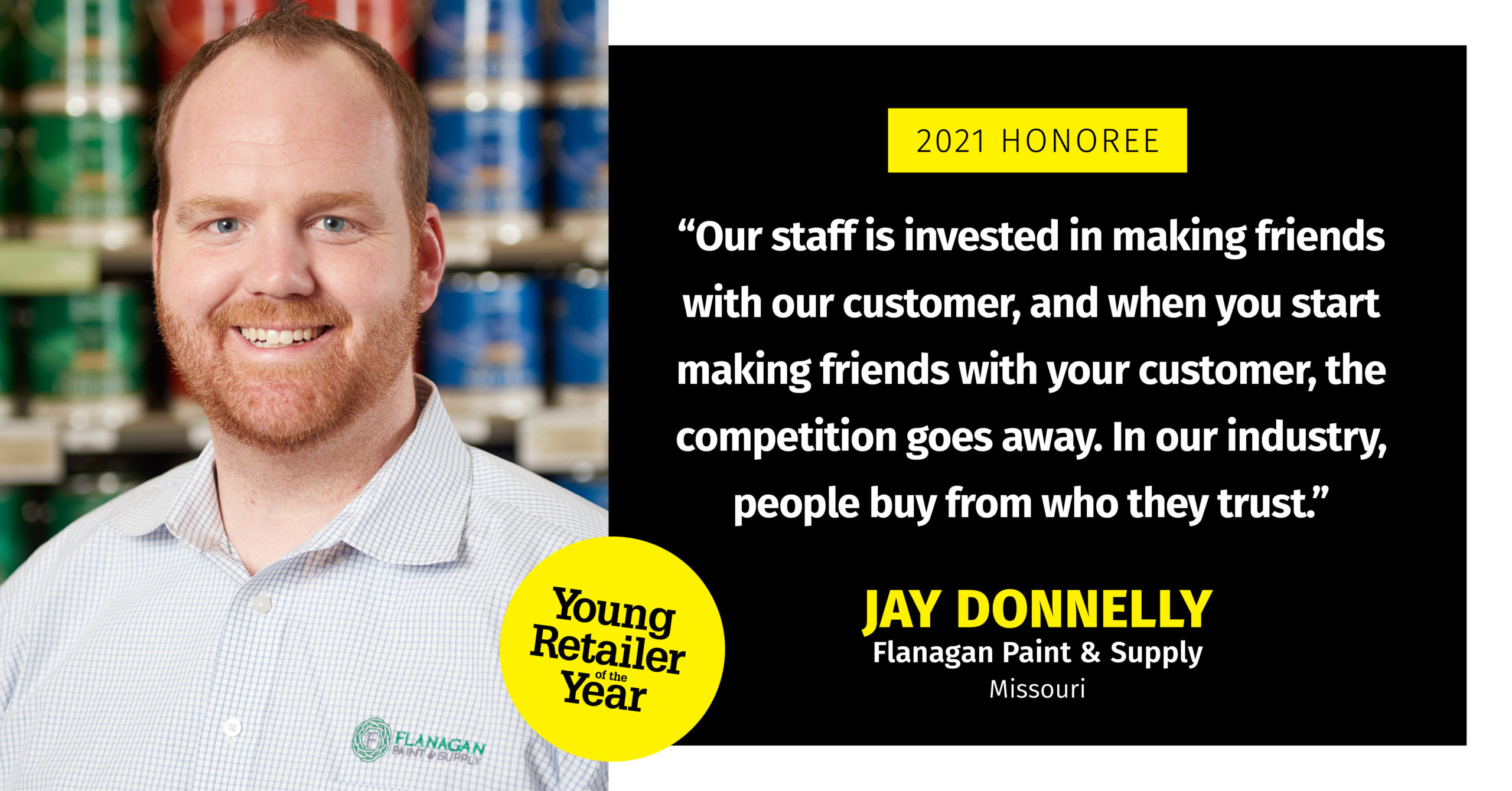 Donnelly learned the ins and outs of running a paint store while on the job; It wasn’t that his father didn’t want to show him the ropes, he explains, but his father didn’t have experience in that side of the business. Donnelly learned how to match colors, tint paint, check and order inventory, take care of the store’s customers and more. He credits technical support from his vendor representatives and the available resources and opportunities at tradeshows with helping him gain product knowledge in those early years.

In 2012, Donnelly was promoted to vice president of Flanagan Paint & Supply. The title made it official, but he had been overseeing operations management, purchasing, hiring, social media and more from the time he started working at the store.

By 2013, the father-son duo had grown the business 25 percent year over year. But Donnelly felt unfulfilled and was ready for a new challenge. He and his father decided to open another store location.

They settled on a retail space in the greater St. Louis area, in Ellisville, Missouri, and purchased the business in 2014.

In 2017, they sold the original Soulard building and moved everything to the 4,700-square-foot Ellisville location. Then in 2018, they opened a new store in Creve Coeur, Missouri; and in November 2020, they acquired a third location in Webster Groves, Missouri.

Unlike the Ellisville location, which caters to everyone from busy contractors to weekend DIYers, the smaller, 2,600-square-foot Creve Coeur location focuses on residential repaint contractors and homeowners. The 2,000-square-foot Webster Groves store also focuses on residential repaint and includes a wood coating shop with lacquers and wood finishing.

Donnelly brings his two daughters, ages 3 and 5, with him to the stores every day. He says he, his wife and his daughters view the stores’ employees as family—and he spends most of his time investing in his team and the company culture they’ve created together. The company motto at Flanagan Paint & Supply is “Making friends is our business.”

In fact, his stores get a lot of calls—and business—from customers looking for a solution after visiting a big box store and receiving incorrect information or products.

Flanagan Paint is a regular supporter of local charitable organizations. The company donates weekly to charity auctions. And whether it’s sponsoring local charity golf tournaments or local painters, Donnelly is always looking for new opportunities to give back to the community.

He also takes his role as an independent paint retailer seriously and seeks ways to empower his colleagues.

Donnelly previously served on the board of directors of the Paint and Decorating Retailers Association (PDRA), which closed operations in September 2020. He is now part of an advisory group of paint retailers that is helping NHPA tailor its programs and services to best address the needs of independent paint retailers. The organization expanded its membership to include paint retailers after the closure of PDRA.

He also participated in the Small Business Administration’s (SBA) Emerging Leaders program, a six-month, mini-MBA style course, which was offered by the SBA’s St. Louis District.

Donnelly says the Emerging Leaders program helped him to define the direction he wanted to take the company. Based on the three-year business plan he created in the course, he hired a fractional chief financial officer and a fractional sales manager to analyze sales data. This decision allowed him to make data-driven decisions for the business and freed up more time to focus on big-picture steps to grow the operation.

Donnelly is now part of the Emerging Leaders alumni group that helps promote the free educational program to other small business executives. And he is still following his three-year business plan.

Donnelly says he has plans to open more stores, further expanding Flanagan Paint & Supply’s footprint in St. Louis. His goal is to not only expand his business to more locations, but strengthen the team supporting those brick-and-mortar destinations.

“People ask me all the time, ‘How many stores do you want?’” Donnelly says. “We’ll see—it depends on the team I have in place.”

“Being chosen as a Young Retailer of the Year is a high honor. Each year, manufacturers, retailers and wholesalers in the industry look forward to celebrating the honorees’ contributions to their communities and the industry,” says Scott Wright, executive director of advanced retail education programs for NHPA. “Jay exemplifies the determination and innovation that keeps our industry growing.”

For more information on the awards program, honorees and more, visit YourNHPA.org/yroty.

About the North American Hardware and Paint Association

Founded in 1900 by a group of retailers, NHPA is a not-for-profit trade association whose mission is to help hardware stores, home centers, lumberyards and paint and decorating outlets in the U.S. and Canada become better and more profitable retailers. Governed by a board of independent hardware and paint retailers, NHPA fulfills its mission by providing information, communication, training programs and networking opportunities for the industry it serves. Each month, NHPA publishes Hardware Retailing and Paint & Decorating Retailer magazines, which reach approximately 45,000 industry professionals. NHPA also provides a wealth of online training and educational resources to thousands of retailers at YourNHPA.org.

Flanagan helped us install custom shutters on the first floor of our home, and they turned out amazing! Our consultant selected a color and style that matched our trim and wainscoting. Also, we installed custom blinds throughout the rest of our house and worked with our consultant to select a wood grain that matched our "modern rustic" décor. We couldn't be more pleased with how everything turned out.

We ordered custom wood blinds from Flanagan, and they look great! Flannagan had many options to customize style, material, and color. Furthermore, we found the process easy for ordering with quick turnaround time and a fast, professional installation.

I highly recommend Flanagan Paint and Supply. They have a fantastic variety of fabrics to choose from and covered all the bases when I updated my bedroom. From color matching, custom window treatments, accent pillows, and more, their specialists and decorators managed my project with professionalism. The results are breathtaking.

I love the personal service I receive at Flanagan Paint. Their staff was very helpful in getting me the supplies we needed to refinish our concrete floor in our finished basement. Also, their expert advice helped us tremendously with the project. I'm sold on Flanagan!

Flanagan is our "go-to" paint store. There comes the point when you need to step away from Lowe's and Home Depot for better quality paints. With Flanagan, you get the expert advice and service that only a specialty retailer can offer. Better paints. Better service. That's why we buy from Flanagan!

Forget about chain stores, Flanagan is the place to go! I found Flanagan through a network of St. Louis rehabbers, who highly recommended them. They are a small, family-run business that had everything I needed. They were super friendly and helpful, even though we accidentally stayed past closing time! Check them out. You'll be glad you did!

Talk To A
Paint Expert

Let our style experts provide recommendations and guidance for your next project.